I’m sure many a Victorian schoolboy day-dreamed himself to the South Seas and onboard the HMS Bounty for the most famous of all mutinies. The Bounty left England just before Christmas 1787 on a ten-month-journey to collect breadfruit saplings for slave food in Jamaica. Following an arduous sail, the crew enjoyed themselves a little too much on the paradise island of Tahiti – many of the men took Tahitian ‘wives’. Three weeks into the second leg of the journey, reluctant to leave their new lives behind and later claiming their captain was tyrannical, the Bounty‘s First Mate, 23-year-old Fletcher Christian, 15-year-old Peter Heywood and others staged the infamous mutiny. Setting Captain Bligh and company adrift in an open boat, Christian and some of the mutineers settled with their wives on Pitcairn island, 1350 miles south east of Tahiti. Although murder and suicide claimed the lives of 8 of the 9 mutineers on Pitcairn, their community eventually thrived. The last mutineer, John Adams, was ultimately pardoned and Pitcairn Island incorporated into the British Empire. By 1855 and with 200 residents Queen Victoria even granted them more territory in the form of Norfolk Island, a former penal colony, 3700 miles to the west. [The illustration below is on Whatman paper, the finest paper at this time and a detail that will become important later in our story.]

1893 facsimile of ‘Plan and view of the landing place in Cascade Bay Norfolk Island, 1793’ by C. Grimes Depy. Surveyor

Those mutineers that chose to remain in Tahiti, if they were not murdered, were eventually captured. Amazingly Bligh’s navigational skills had successfully guided his overloaded open (!) boat across treacherous waters to Timor and from there he eventually made it to England where he reported them. The admiralty despatched HMS Pandora under Captain Edwards which successfully captured those mutineers still alive on Tahiti but not those hiding on Pitcairn. In a further dramatic turn of events, Pandora ran aground on the Great Barrier Reef. Many in “Pandora’s Box” drowned because they were still in shackles while the crew tried to save the ship but Peter Heywood and nine other prisoners were released just in time but only to be transported back to England. This etching of the Pandora foundering by Robert Batty (1789-1848) is actually based on a sketch by Heywood. Back in England, the Court Martial in 1792 sentenced three of the captured mutineers to hanging and the other three, including Heywood, were eventually pardoned. Class and patronage played a substantial role in their exoneration. Heywood’s family had secured expensive representation and were very well connected. Ironically, it was family connections that had put both Heywood and Christian on Bligh’s Bounty in the first place. Heywood was very much part of a family project – from a long line of Manx naval men – and had been recommended by Bligh’s father-in-law. Fletcher Christian hailed from the Cumberland gentry and a family devoted to the law but had spurned their old profession for the excitement of the sea. 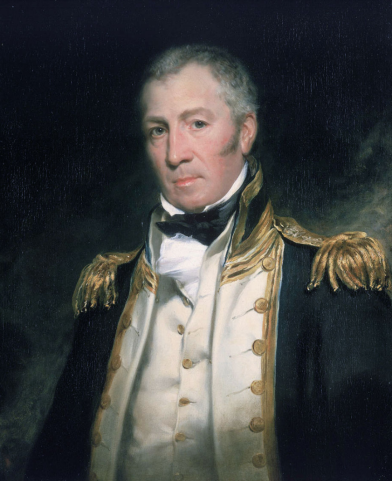 Heywood was even subsequently re-commissioned by the Royal Navy, under Admiral Lord Hood – the man who had resided over his very court martial. Despite the scandal, Heywood went on to be well thought of in naval circles and continued to be promoted up the ranks. By 1803 he had achieved the rank of Captain. By 1808, now safe from his past and successful again, he writes to fellow Captain and friend Jeffrey Raigersfeld – the painter of the delightful header image for this blog post – of his relief that his sister’s little book is restoring his good name. His sister, Hester (“Nessy”), had petitioned relentlessly for his pardon (and no doubt to protect the family’s reputation also). Some said this relentless task contributed to her early death. 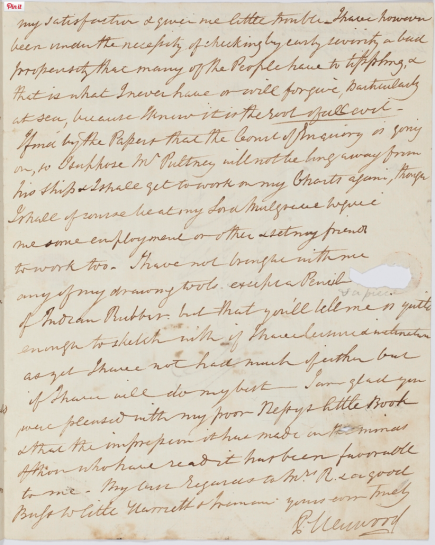 Extract of letter from Peter Heywood to Jeffry Raigersfeld, 24 Nov. 1808

840) portrays the trials and adventures of life at sea from his time as a boy sailor through to becoming an officer. We learn that after serving as a young lieutenant on HMS Speedy, he then joined Cuthbert Collingwood’s HMS Mediator – a 44-gun frigate – for a series of adventures. Mediator had been sent to enforce the Navigation Acts, which now applied to American ships trading with the British colonies (and they would later be joined by Nelson himself and HMS Boreas in this endeavour). Collingwood is arguably the inspiration behind the character Jack Aubry in Patrick O’Brien’s book Master and Commander – portrayed by Russell Crowe in the film of the same name.

Raigersfeld was well connected. His father had been the Secretary of the London embassy for the Holy Roman Empire. The family appear to be of Slovenian descent and related to the enigmatic Marija Ana Elizabeta Baroness Raigersfeld (1710-1752), portrayed here:

Marija, daughter of Baron Erberg, was spotted when aged just 14 at the Provincial Theatre in Llubljana by Franc Henrik Raigersfeld. He noted her beauty and ‘angelic face’. They were married a year later. Franc was one of Carniola’s (a historical region of Slovenia) most successful and wealthiest businessmen and also a high state official. He was granted a hereditary barony in 1747. Marija had a staggering twenty-two children but died in her early forties. The artist Franc Linder was commissioned by her husband to create the posthumous miniature shown here from an existing portrait. 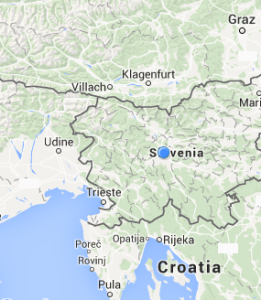 On their way to uniting with the Crosthwaite’s family tree, the adventurous and well-travelled Raigersfelds married into the Whatman paper empire (in generation 2 of our project’s tree). The successful Whatmans had themselves married into the Bosanquet bankers (in generation 1 of our project) and all were very well connected and afluent. In 1838 in London, Raigersfeld’s daughter, Harriet Elizabeth (b.1814) – herself eventually Baroness of the Holy Roman Empire – married Eton- and Christ Church (Oxford)- educated, Charles James Whatman (1818-1855). Charles was the grandson of James Whatman the Younger, also a well educated man who attended Cambridge University. Whatman the Younger had married Susannah Bosanquet (1753-1814). His second wife, she was the cousin of Samuel Bosanquet (1744-1806), Director of the Bank of England. 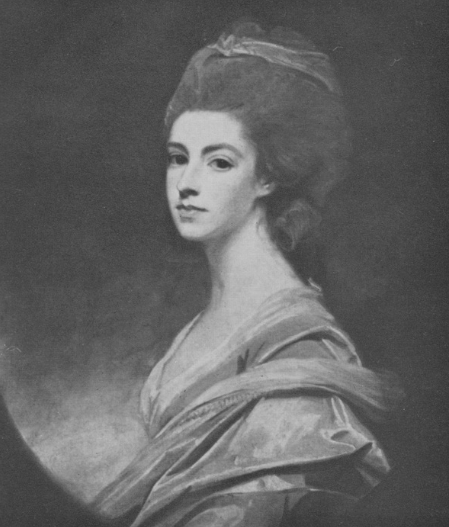 Susannah Bosanquet Whatman herself was a purposeful woman and masterfully managed Turkey Court, keeping a detailed notebook of her household management and especially how to ensure the servants performed their duties to an acceptable standard. The Housekeeping Book of Susanna Whatman (1776) reveals the ongoing management issues of being mistress of the Turkey Hill estate, a substantial development. Now a National Trust publication, her book is a fascinating account of the way a large household was run. 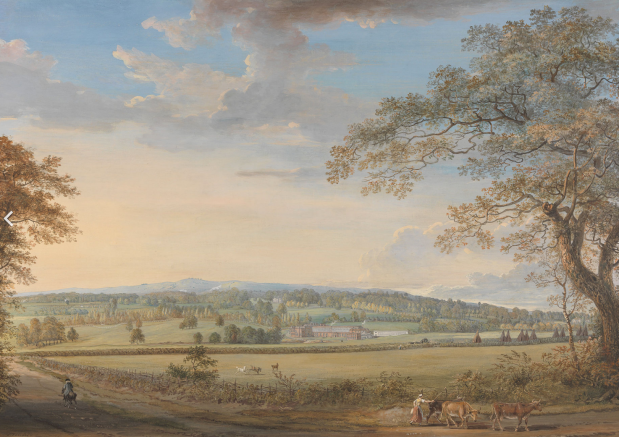 Her husband, James Whatman the Younger (1741-1798), was very prosperous. Inheriting his father’s already successful business of making the finest papers, he innovated from small scale production methods to a more industrial model of manufacturing. The Whatmans were responsible for pioneering ‘wove’ paper – producing paper on a woven mesh material – resulting in a sheet of paper having a much less irregular surface than laid paper immeasurably improving the quality of printed work. Its smooth surface lacked the furrows of traditional laid paper which caused pigment to puddle on the page. Whatman paper was used by JMW Turner, John Robert Cozens, John Sell Cotman and Cornelius Varley. William Blake used it for four of his illuminated books, the public being informed that they were printed on “the most beautiful wove paper that could be procured”. Indeed, many of the masterpieces of Romantic watercolour painting in the early nineteenth century are on paper bearing their watermark. You can read more about their fascinating story on the Turkey Mill website.

Back to Susannah’s son, Charles, who inherited the profitable Whatman paper business. Sadly after marrying Harriet Raigersfeld (b.1814), he died young at just 37 and his son subsequently died even younger at 32. Their daughter faired better in life’s lottery. The lightly named, Augusta Bertha Elizabeth Raigersfeld Whatman (1869-1925) married Sherborne schoolmaster Robert Crosthwaite (by now generation 3 in our Victorian Professions Project family tree) and lived a long life. I’m sure Robert Crosthwaite’s pupils would have all delighted in tales of mutiny on the Bounty and high seas sculduggery, little realising that their teacher’s, wife’s, great-great grandfather sailed those very same seas and knew one of the mutiny’s key protagonists very well.

Mutiny on the Bounty

C. Alexander, The Bounty. The true story of the mutiny on the Bounty (Harper Collins, 2003)